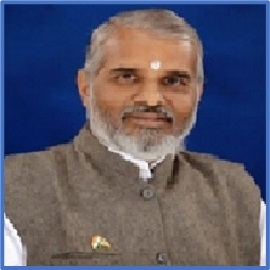 Joined State Bank of Mysore as a cashier/clerk with 10th and +2 qualification, got 3 promotions to become a senior manager and took voluntary retirement during 2007, after serving 32 years.

Joined SVYASA University Arogya dhama in 1997. Did Yoga Instructor Course (YIC) in 1997 and started teaching yoga in 1998, completed M.Sc (Yoga) in 2007 from SVYASA University with blessings of Dr.H.R.Nagendraji and Dr.Nagarathnaji. Did M.phil yoga from Global Open University, Nagaland. He was awarded an Honorary doctorate in yoga in 2017.

Organized state level conference on Yoga and Naturopathy in 2009.

Stop Diabetes Mellitus Program (SDM) in 2009 and 2010 on behalf of Govt of India through SVYASA Yoga University.

International Conference on Yoga, Naturopathy (ICYN) in 2012 with 5500 delegates from 30 countries in palace grounds, Bangalore.

Organized an international conference on Yoga Ayurveda and Spirituality in 2013.

Conducted a lot of FREE yoga camps to create awareness.

Designed and conducted “Atma Dharsana Yoga” (ADY) in 85 batches for 10000+ persons in many countries including many cities in the USA.